So said Brother Malcolm Knowles and on Friday 25th January 2019 he was present at Hipperholme Lodge of Royal Ark Mariner No.715 to fulfil that step and become a Royal Ark Mariner. Malcolm had been initiated into Freemasonry at Clifton Lodge No.7112, thought about the next move for a while and was Advanced into Brighouse Mark Lodge No.753 in January 1978, considered again and there he was, as W.Bro. Vic Smith would have said, now on the brink of becoming a member of the ‘Creme de la Creme’. 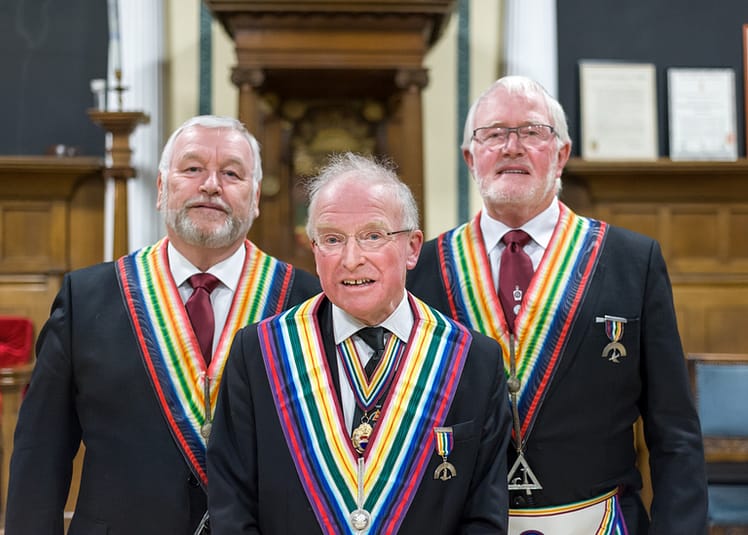 In the company of the the Worshipful Commander, Worshipful Brother Andrew Beardsell, his Lieutenants, Crew and visiting Mariners from vessels moored nearby, the Lodge was opened in due form. whereupon the first matter was in the hands of Past Provincial Grand Master, R.W.Bro. Brian Batty. He presented a eulogy following the sad death of W.Bro.John Whitehead, son of a revered Past Provincial Grand Master of thirty plus years, R.W.Bro.Carl Whitehead. John had enjoyed a distinguished career in his private life as well as his Masonic interests and was a highly respected and well liked Brother who has been, and will continue to be missed all ,who had the pleasure of his company., At the same time, R.W.Bro. Brian mentioned W.Bro. Ashley Barker and, as we only learned on the day of the meeting, the death of W.Bro. Sidney John Bruton Barlow, an ebullient and enthusiastic individual you could not miss or ignore!

Attention then turned to the Ceremony of Elevation, a short hiccough at the outset but that was soon put to bed and the WC, W.Bro.Andrew put the ship back on course obligating Bro.Malcolm in fine form, A smooth transition saw the signs despatched in an excellent manner W.Bro. John McRiner, the Working Tools explained in similar order W.Bro.Martin Scott and the Ceremony neatly concluded W.Bro.David Leach, a shipmate from Peace RAM No.681, who explained the relevance of the Triangular form of the Lodge and the significance of the Steps, from where I sat word perfect. As a member of Peace myself, I think it might be  a good idea to rent David out. Nothing of note remaining the Lodge was closed and all adjourned to the Mess for a well earned festive board, the latter dutifully consumed.

The Toasts were then submitted, under the direction of the Acting D.C.,  W.Bro. Dr. Rod Taylor, Past.Asst.Prov.G.M.  The Toast to the Candidate was given R.W.Bro. Brian, his proposer who pointed ot that this wast he month of his fort first anniversary as a Mark Mason, some fifty three years after he entered the Craft. He trusted that he would enjoy this new journey, in his ninetieth year and also for many more years to come. In response Bro. Malcolm thanked all for a wonderful evening, he was looking forward to learning more about the Fraternity, most certainly to see the Ceremony of Elevation again to take it all in.

In passing, some notes for your diaries:

Saturday 5th October at Tapton Hall, the Provincial Assembly of Royal Ark Mariners; Note that a  a new Provincial Royal Ark Mariner banner will be unveiled this year, date to come and a Gala Christmas Ball will be held, again at the Bankfield Mercure Hotel, Bingley, on the 30th November, Last, but not least put, Saturday 13th April at Bradford Grammar School in now, Annual ,,, meeting of the Province  Grand lodge of MMM of West Yorkshire, one not to miss.. Also Masters and Wardens please note that it is a responsibility of your Office to represent your Lodge around the Association and at the Provincial meeting, look forward to seeing you there.  bear in mind it is the only day of the year that most of you can support R.W.Bro. Jim at his Lodge, do not let him down.

Do not forget, Smile, be happy, you are all Royal Ark Mariner Masons