The weather worsening and snow showers coming from the western approaches, the Commander and Crew of the Peace Lodge of RAM .together with shipmates from other vessels from the West Yorkshire Fleet and other navies, fought the conditions to reach a safe harbour at Uppermill. Unfortunately the Captain of Peace, W,Bro, David Key, was unable to attend and his predecessor, W.Bro. Alan Corbridge stood in, having only found out a few hours earlier, he convened all present to the Quarter Deck and dealt with the early business for which we had met, this included two dispensations for the day. 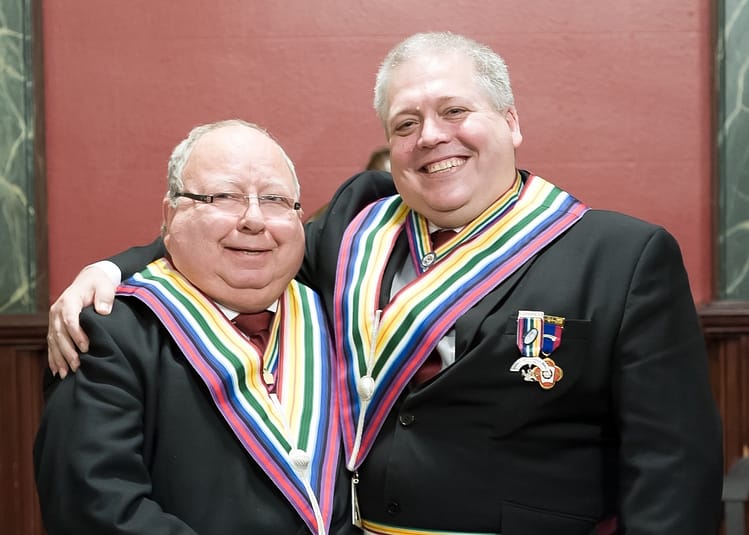 The first item of note was the presentation of a Grand Lodge Certificate to Bro. Stuart Burrows , this in the hands of Vice Admiral, Worshipful Brother Alan Oldfield, the Deputy Provincial Grand Master. Much to the amusement of all the Acting DC, W.Bro. Mike Jessop, had announced that  Bro Stuart was not present when a voice was heard to mutter’ well I was when I came In’. W.Bro. Alan dealt with it in a polished professional manner other than when he faltered very slightly, afterwards commenting that he would have welcomed a prompt when someone was heard to reply, we would have had we known what to say!

The Commander Elect, W.Bro. Warren Marsden was then presented W.Bro. Mike and the short form ceremony despatched with skill and ease, W.Bro. Warren was then placed in the Chair. The Officers who would then support the Skipper to navigate the Peace Lodge through the ensuing year were appointed and Invested. The Working Tools were then explained W.Bro. Michael Nowell, the Keystone Collaret W.Bro. David Leach, a most accomplished ritualist. This brought us to the Exposition delivered W. Bro Bev Heywood, not the first time and again without hesitation. He does have his own inimitable style which prompted W.Bro.Chris Oldfield when responding to the Visitors Toast, to comment that he thought that he was about to be regaled with a Stanley Holloway monologue, Albert and the Lion, a roar went up when that was mentioned. The Ceremony then concluded with the Address to the WC W.Bro. Andrew Daly, congratulations to all who took part on a task well done, perhaps not the most polished ritualistic performance but what it lacked there it more than made up for in sincerity and brotherly love demonstrated

All Hands summoned to the Mess Deck where, true to form delicious soup to start, more a meal in itself, Braised Steak, Treacle Sponge, cheese and biscuits, excellent value at thirteen pounds per head.. The Toast List then proceeded with that to the Province efficiently dealt with the SW, Bro. Terry Kinvig. Responding W.Bro.Alan, reminded us that it is the responsibility of the Secretariat to ensure that any Ruler or Representative is advised in writing and receives an Invitation from the Lodge. This Alan said he received on a scrappy piece of paper, which he held aloft, when he arrived at the Lodge from, you guessed it, the newly Installed Commander, but also the Dep.Prov.G.Sec, W,Bro Warren, oh dear things are on the slide! He then congratulated the WC upon attaining the Chair which he now holds in addition to being Commander of Dewsbury Lodge of RAM No.641, a dispensation required when in the chair of two lodges in the same year, and Caldene Lodge of MMM No,501..  Watch out he may come to your next Installation and surprise you. W.Bro Alan emphasised that  it was the responsibility of W.Bro. Warren, in all three of his various guises, to represent the Lodge around the Province and Installed Masters Association, whilst his name is at the head of the Summons.

W.Bro.Alan then provided the following Notes for your Diaries; Provincial Assembly of RAM, Saturday 5th October at Tapton Hall,  a new Provincial Royal Ark Mariner banner will be unveiled this year, date to come and a Gala Christmas Ball will be held, again at the Bankfield Mercure Hotel, Bingley, on the 30th November, Last but not least put Saturday 13th April at Bradford Grammar School in now, Annual Provincial meeting of the Province of West Yorkshire, one not to miss.

The gangplank lowered, Commander, Crew and shipmates disembarked and sailed home to their respective Cabins after a most enjoyable Royal Ark Mariner installation.