The Admiral of the Fleet, the Provincial Grand Master, R.W.Bro. James Steggles, present the Lodge was opened, Salutations delivered and the opening procedures covered in fine form the Skipper, W.Bro.Richard Beecroft.

The Officers and Crew, together with fellow matelots from sister ships present, all assembled on the main deck for the Installation of Brother David Lees as the Worshipful Commander of the good ship Abbey for the ensuing year. This was undertaken in a professional and sincere manner W.Bro.Richard who ensured that W.Bro. David, as he then became, was obligated and made privy to the signs and secrets of an Installed Commander before placing him in the Chair. The Assembly of Royal Ark Mariners then closed, the Keystone Jewel was explained W,Bro. Alan Young, then presented W.Bro.Richard. This was followed one of the highlights of the ceremony, the Exposition in the very capable hands of W.Bro. Les Davy, barely a hint of hesitation in a flawless delivery, acknowledged all. 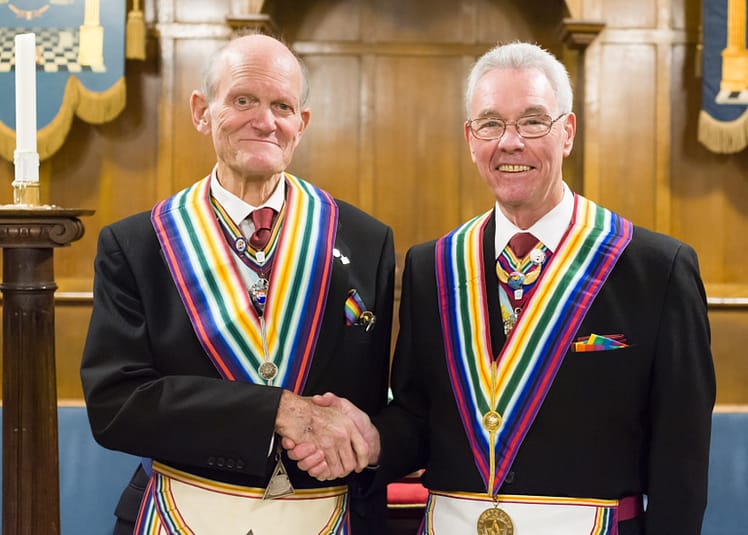 After the Appointment and Investiture of the Officers all of whom will serve on the ship for the next twelve months, the Address to W.Bro. David was presented, with emphasis and great sincerity, W.Bro. Brian Harrison.  W.Bro. Peter Guest was in charge of the Past Commanders Jewel which he delivered to W,.Bro. Richard commenting that the latter was now in 13 Lodges in 7 Orders, not as many as W.Bro. Gerry Barker, but then again no one is anywhere near Gerry. The concluding items covered all adjourned to the Mess Deck for appropriate sustenance.

With the PGM in attendance,  W.Bro. John Maxwell proposed his health commenting that our PGM leads example, supporting Lodges and individuals. Most importantly he insists on an adherence to the Cardinal Virtues as expressed in the Royal Ark Mariner Fraternity, watchfulness, discretion, brotherly love, truth and charity which he most assuredly practices in his daily life and actions.  Editorial note , that is exactly right, in Freemasonry we have our ritual  and process but they are the form of Freemasonry, the substance is our precepts,  our cardinal virtues, it is those that we become better Men and Masons. We often hear the comment about making a daily advancement in Masonic knowledge, to that we should add  a daily example of delivering those precepts in our relationships with all members of Society; this we can truly make Better Men of Men.

Responding R.W.Bro.Jim congratulated W.Bro. David upon his Installation as Worshipful Commander and hoped that, with the help of the Brethren, they would find a candidate in the coming year. He also drew attention to the ‘Perimeter Perambulation’ to be undertaken V.W.Bro. Richard Puttrell. Letters have gone out to all Lodges with details. Also a new Provincial Royal Ark Mariner Banner is to be unveiled in 2019, something to look forward to as well as the Consecration of the Past Provincial Grand Stewards Lodge, a busy year ahead.

The Toast to W.Bro. David was given W.Bro.Les Davy, a good friend saying that David was an accomplished Mason already and he referred to their shared interest in Classic Cars and their membership of ‘Classics on the Square’ ; the latter conjuring up an image of Mozart, Bach and other Composers rather  than a 1960 Ford Cortina.

All aboard having thoroughly enjoyed the voyage, the gang plank was lowered and all retired. A most enjoyable Royal Ark Mariner meeting, Smile and be happy